Sponsored by the Journal of Strain Analysis for Engineering Design

The Journal of Strain Analysis for Engineering Design provides a forum for research relating to themeasurement and analysis of strain that is appropriate to engineering design and practice.

The JSA Young Investigator Lecture is intended to recognize a member of SEM in early to mid-career (generally 5 to 10 years after degree receipt) whose work demonstrates considerable potential in the field of Experimental Mechanics.

This Award is obsolete. It has been replaced by two awards: Springer/Nature Young Investigator Lecture and SAGE Publishing Young Engineer Lecture. 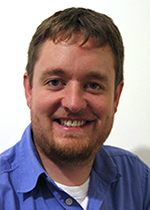 In recognition of his outstanding early-career contributions to experimental mechanics.

Clive R. Siviour
Clive Siviour completed his undergraduate degree in Physics at the University of Cambridge in 2001, where he remained to complete his doctoral thesis, High strain rate properties of materials using Hopkinson bar techniques. In 2005, he moved to the Department of Engineering Science, University of Oxford, initially as a ‘Career Development Fellow’ before taking up an Associate Professorship in 2008. His main interest is characterisation of materials under dynamic loading, in particular the use of time-temperature superposition to validate and replicate the response of polymers to high rate deformation using quasi-static experiments, and deriving and interpreting quantitative measurements from high -speed photography.

The Society acknowledges the following individuals who were given the JSA Young Investigator Lecture Award in the past.