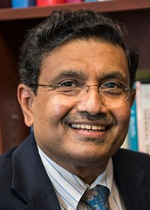 Hareesh V. Tippur is the McWane Endowed Chair Professor and Associate Chair of Mechanical Engineering at Auburn University, Alabama. He has worked extensively in the areas of fracture and failure mechanics of solids with an emphasis on high-strain rate response of materials. He is credited with the development of several quantitative visualization tools including Coherent Gradient Sensing (CGS), infrared rough surface interferometry, digital image correlation with ultrahigh-speed photography and more recently the Digital Gradient Sensing (DGS). To date his research has resulted in over 250 publications in archival journals, book chapters and conference proceedings. Several federal agencies including NSF, DOD, NASA and FAA have sponsored his research over the years. He has received awards and recognitions from various professional societies including the Hetènyi and Tatnall Awards from SEM, Beer-Johnston Mechanics Educator Award from ASEE, Fellow status in ASME and SEM, Orr Award from ASME, Fylde Electronics Prize from the British Society for Strain Measurement, A.S. Kobayashi Award from ICCES. He has served as the editor-in-chief of Experimental Mechanics journal between 2010-2015 and was a member of SEM executive board during 2015-2017. Currently he serves on the executive committee of the Materials Division of ASME.