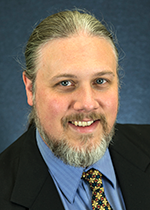 Gordon Shaw received a BA in chemistry in 1997 from Skidmore college and shortly thereafter began work in the semiconductor industry at EKC Technology, Inc. (now DuPont Electronic Chemicals.) Subsequently he completed a PhD in analytical chemistry in 2004 at the University of Wisconsin at Madison advised by Wendy Crone and Arthur Ellis. His dissertation work centered on the characterization of the nanometer-scale mechanical properties of nickel-titanium shape memory alloys. It was during this time that Gordon began attending SEM meetings. He joined the U.S. National Institute of Standards and Technology (NIST) the same year as a National Research Council postdoctoral fellow, and transitioned to a staff scientist position as a Research Chemist in the Physical Measurement Laboratory’s Mass and Force Group. He is the current PI of the Small Mass and Force project which develops metrology for the measurement of mass less than 1 gram and force less than 10 millinewtons. He has been earned the Charlotte W. Fahey undergraduate chemistry award, the SEM Young Investigator Lecture, two Department of Commerce bronze medals, and authored more than 30 peer reviewed publications. Gordon’s current research interests center around using the recent redefinition of the kilogram in the International System of Units (SI) to develop new methods to realize primary standards for the optical watt using photon pressure forces and the becquerel using an electrostatic force balance.