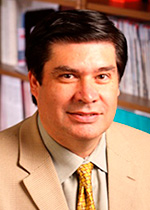 Horacio D. Espinosa is the James and Nancy Farley Professor of Manufacturing and Entrepreneurship, Director of the Institute for Cellular Engineering Technologies, and Director of the Theoretical and Applied Mechanics Program at the McCormick School of Engineering and Applied Sciences at Northwestern University. He received his Ph.D. in Applied Mechanics from Brown University. Professor Espinosa has made contributions in the areas of dynamic failure of advanced materials, micro, and nanomechanics. He is a foreign member of the European Academy of Arts and Sciences, the Russian Academy of Engineering, and Fellow of AAAS, AAM, ASME, and SEM. He received numerous awards and honors including the ASME Thurston award, the Society for Experimental Mechanics Lazan, Hetenyi and Sia Nemat-Nasser awards. He was the Timoshenko visiting Professor at Stanford University in 2011, President of the Society of Engineering Science in 2012, and currently serves in two committees of the National Academies, the U.S. National Committee on Theoretical and Applied Mechanics and the Panel on Materials Science and Engineering to advise the Army Research Lab.