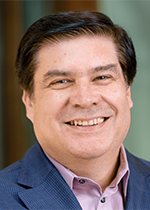 Horacio D. Espinosa is the James and Nancy Farley Professor of Manufacturing and Entrepreneurship, Professor of Mechanical Engineering, and the Director of the Theoretical and Applied Mechanics Program at the McCormick School of Engineering, Northwestern University. He received his Ph.D. in Solid Mechanics from Brown University in 1992. Espinosa has made contributions in the areas of deformation and failure of materials, design of micro- and nano-systems, in situ microscopy characterization of nanomaterials, and microfluidics for single cell manipulation and analysis. He has published over 300 technical papers in these topics. Espinosa received several awards including the PRAGER Medal from the Society of Engineering Science, the Society for Experimental Mechanics MURRAY and SIA NEMAT NASSER Medals, and the ASME THURSTON award. He is a member of the National Academy of Engineering (NAE), foreign member of Academia Europaea, the European Academy of Arts and Sciences, the Russian Academy of Engineering, and Fellow of AAAS, ASME, SEM, and AAM. He was the President of the Society of Engineering Science in 2012 and is a member of the IUTAM General Assembly.