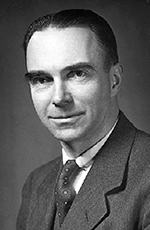 William M. Murray Lecture was initiated in 1952 as the Society’s prestige lecture.

It is presented each year as a continuing honor to Dr. William MacGregor Murray,
first president and long-time secretary-treasurer, for his many contributions to SEM.

Fu-pen Chiang
Fu-pen Chiang's research emphasis is on the development of optical and other experimental mechanics techniques and their applications to stress analysis (including NDE), fracture and fatigue of engineering and biological materials and structures. He has written over 400 journal and conference articles published in 58 archival journals and numerous conference proceedings. He has given invited lectures at 23 institutions in 17 countries and was a visiting faculty of Cambridge University (Cavendish Laboratory), Swiss Federal Institute of Technology (Lausanne), National Taiwan University, Tsinghua University (Beijing and Taiwan), among others. His research has been supported by NSF, ONR, AFOSR, ARO,, NIH, DOT and industrial concerns. He received Theocaris Award (2015), Frocht Award (2008) and Lazan Award (1993) from the Society of Experimental Mechanics and the Life Time Achievement Medal (2012) from the International Conference of Computational and Experimental Engineering and Sciences. In 2016 he received the Life Time Achievement Award from the European Society of Experimental Mechanics at the 17th International Conference on Experimental Mechanics held in Rhodes, Greece. He served as Editor of Int. J. Optics of Lasers in Engineering, Associate Editor of J. of Experimental Mechanics and ASME J. of Engineering Materials and Technology. He also served as Guest Editor for four special issues of J. Optical Engineering and has organized many international and national conferences.

Past Recipients
The Society acknowledges the following individuals who were given the William M. Murray Lecture in the past.