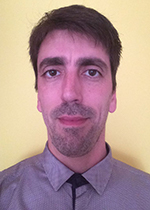 Florent Bridier received his M.S.Ing. degree in Aeronautics in 2002 at Ecole Nationale Superieure of Space and Aeronautics in Toulouse (France), and his PhD in Material and Mechanical Science in 2006 at University of Poitiers (France). After a year as postdoctoral researcher at Georgia Institute of Technology in Atlanta, Florent worked for 6 years as a researcher at the Mechanical Engineering department of Ecole de Technologie Superieure in Montreal (Canada) specializing in experimental characterization of microscale plastic behavior of aeronautical alloys. Since 2013, Florent joined Naval Group in Nantes (France) as a Research Engineer. His main current research activities concern fatigue behavior of naval structures and numerical simulation of welding.