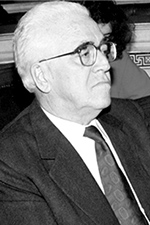 P.S. Theocaris was a legendary figure in the mechanics community in Greece. He also was one of the most outstanding experimental stress analysts in the world during the second half of the twentieth century. He was member of the Academy of Athens, the most prestigious distinction of professionals in Greece. He also served as corresponding or, foreign member to other Academies in Europe. He was the recipient of many awards and distinctions. He was elected as SEM Fellow in 1979. As an experimentalist, he is known primarily for his work in moiré, photoelasticity and caustics.

The award in question is designed to recognize a senior individual for distinguished, innovative and outstanding work in optical methods and experimental mechanics. 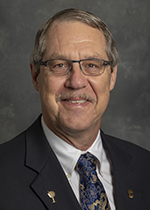 For outstanding contributions in the application of coherent and incoherent optics to mechanics and developments to Digital Image Correlation.

Michael A. Sutton
Dr. Michael A. Sutton received his Ph.D. in Theoretical and Applied Mechanics from the University of Illinois in Champaign-Urbana in 1981. He has spent his professional career as an educator and scientific researcher in the Department of Mechanical Engineering at the University of South Carolina.  Prof. Sutton has published 230+ journal articles, written eight research book chapters, one textbook chapter and co-authored a book on digital image correlation methods. Prof. Sutton’s current interests are in applications of digital image correlation methods in civil engineering infrastructure, aerospace composite materials, high rate loading of materials and synthesis of image correlation and analytical methods.

The Society acknowledges the following individuals who were given the P.S. Theocaris Award in the past.