As with all SEM awards, we strongly solicit nominations from the members of the Society for this lecture. The nominee should be recognized for the potential of work early in his/her career, and should be a member of the Society. On the academic side, this could be someone at the Assistant or Associate Professor level. On the industrial or Government Lab side, it could be someone up to 10 years after hire. These are only guidelines and not absolute rules. 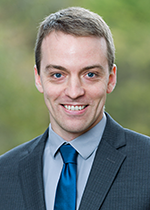 In recognition of outstanding early-career contributions to experimental mechanics.

Joe Schoneman
Joe Schoneman received his B.S. and M.S. in Engineering Mechanics from the University of Wisconsin. In 2016, he joined ATA Engineering’s southeastern regional office in Huntsville, AL, where he supports and manages projects related to the structural dynamics, aeroelasticity, and flight mechanics of launch vehicles and high-speed aircraft. His research interests include nonlinear structural dynamics, dynamics and stability of structures exposed to extreme aerothermal environments, and flight mechanics of novel high-speed concepts. Mr. Schoneman is a United States Marine Corps veteran and 2014 recipient of a National Science Foundation Graduate Research Fellowship. He has been attending and presenting at IMAC since 2016.