Each new honorary member is notified of this honor by letter from the President of the Society and publicly honored by presentation of a plaque at the next meeting of the Society. 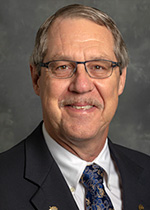 Michael A. Sutton
Prof. Michael A. Sutton is a Distinguished Research Professor at the University of South Carolina and Senior Scientific Officer at Correlated Solutions Incorporated. He received his Ph.D. in 1981 from the Department of Theoretical and Applied Mechanics at the University of Illinois under the direction of Prof. Charles E. Taylor. Prof. Sutton joined the Department of Mechanical Engineering at the University of South Carolina in 1982 where he has remained throughout his career. A member of the National Academies of Engineering in the US and Slovenia, he is a Fellow and Past-President of the Society for Experimental Mechanics (SEM), Fellow of American Society for Mechanical Engineering (ASME) and Founding President of the International Digital Image Correlation Society (iDICs). Prof. Sutton has made significant contributions in the fields of experimental mechanics and fracture mechanics. As one of the inventors of the digital image correlation methods used worldwide, he co-authored the first book on image correlation methods written eight book chapters focusing on DIC principles and applications and published over two hundred and thirty archival articles. Prof. Sutton’s current areas of research interest include fundamental concepts in 2D and 3D computer vision for deformation measurements, applications of StereoDIC methods in civil infrastructure, modeling of composite bonding during manufacturing, with special emphasis on measurement of traction-separation laws to predict defect formation and the integration of DIC measurements with finite element models. Prof. Sutton married Elizabeth Ann Severns in Carmi, Illinois in 1973. They have two married daughters, five grand-children and continue to reside in Columbia, South Carolina on a 12.5 acre urban farm and nature preserve.

Past Honorary Members listed by date of election.